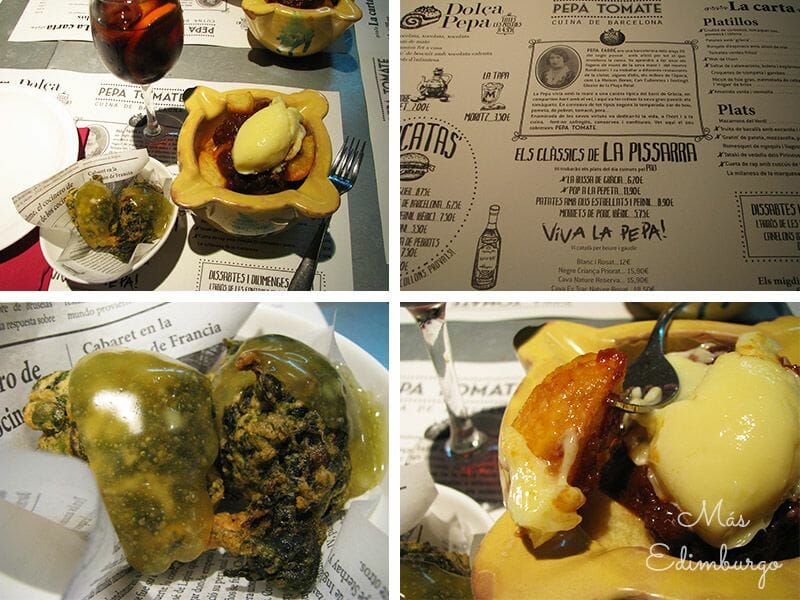 Barcelona is one of the world’s leading culinary destinations, and not just for the reasons you’d imagine. Granted, the city boasts an ever-growing array of Michelin-starred restaurants, and on a warm, summery day nothing beats lunch at one of la  Barceloneta’s seafood restaurants. But wander around any of the ciutat comtal‘s districts (here’s some other articles I’ve written about my city) and you’ll still come across tons of delectable little eateries and unexpected dining experiences.

A few days ago, I was invited to try out Gastournomic, a newly designed guided Barcelona food tour which aims to discover and tell the city’s fascinating history while sampling some scrumptious Catalan and Spanish cuisine at high-quality local restaurants and specialty shops. 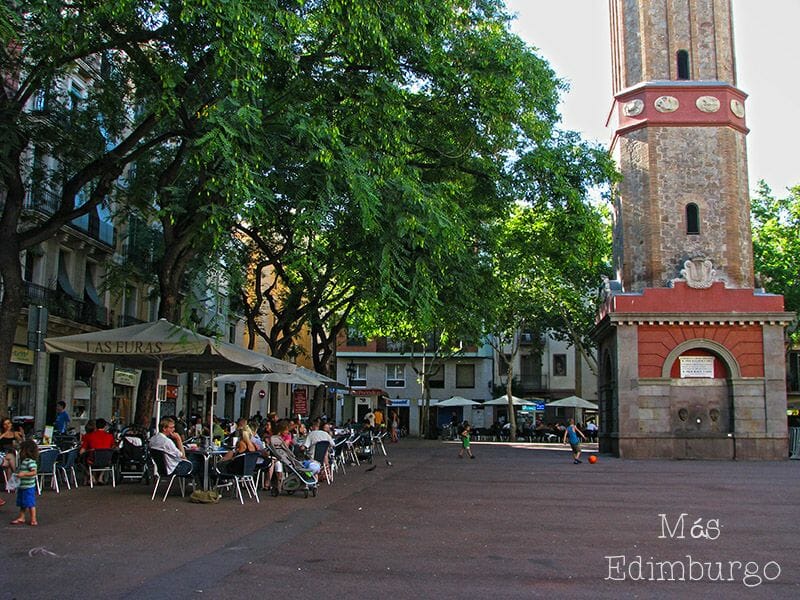 In Gràcia, life is what happens to you while you’re hanging out in a square (above, Plaça de la Vila)

Each Gastournomic Barcelona food tour focuses on a different part of the city. My choice was Gràcia, one of Barcelona’s most vibrant districts – it was an independent town until 1897, and it still retains a small village feel while being packed with activities, trendy eateries and art galleries. For these reasons, and many more, Gràcia is one of my favorite neighborhoods, away from the hustle and bustle of the city yet filled with a lively atmosphere. And the Gastournomic tour, which lasts 4 hours and stops at 5 food establishments, threw some new (and tasty) light on Gràcia’s history and dining experiences. See for yourself!

I met my fellow tour goers (the groups are small, which contributes to creating a more personal experience) and our guide, Rafa, and as we walked north into Gràcia, we learnt the story behind architect Lluís Domènech i Muntaner’s graceful Casa Fuster, a modernist bulding turned into a 5* hotel. 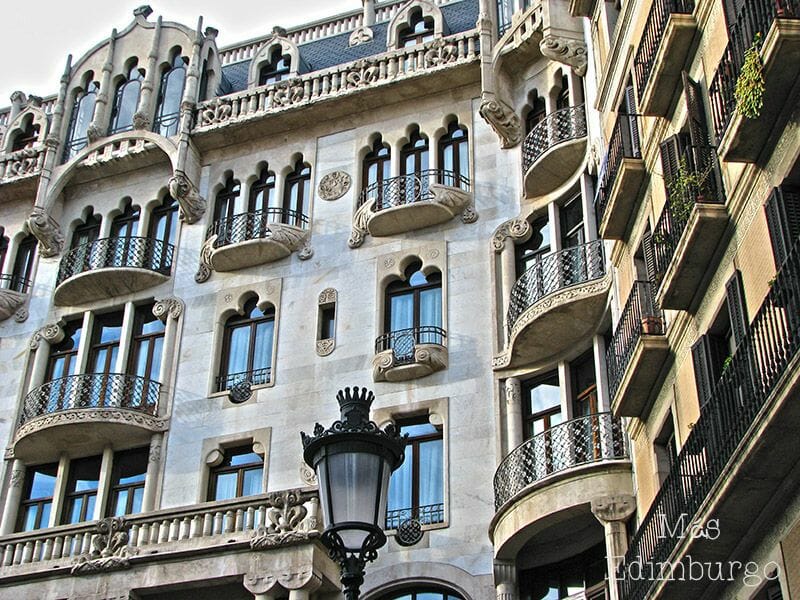 The modernist Casa Fuster, in Jardinets de Gràcia, is nowadays a 5* hotel.

After that, it was time for our first culinary stop at a wine specialty shop in c/Bonavista. We all enjoyed a glass of wine coupled with some cheese and Cinco Jotas top-class jabugo ham – not for me, though! I’m a vegetarian and the whole tour was tailored according to my needs – a I got an extra serving of luscious Boffard cheese, which is produced near Valladolid. 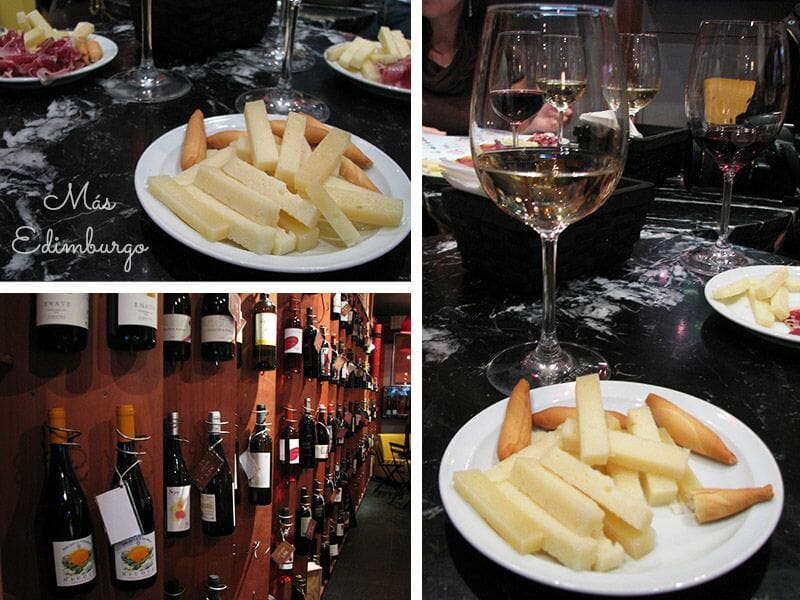 At this specialty shop, we sampled some wine and Spanish Boffard cheese.

We stopped briefly at Plaça de la Vila, Gràcia’s most iconic square and one where you’ll get a genuine, local feel no matter when you visit. Our next stop was an olive oil specialty shop located in Travessera de Gràcia. Their motto is «From the olive tree to the table», and they really do store some unique, flavorful oils – if you’re looking for an original gift, they sell online, too. Olive oil is one of the pillars of the Mediterranean diet, but even for someone like me, who drizzles all meals with the liquid gold, the vast array of olive oils in Oli Sal came as a surprise. We tasted some of them, along with some balsamic vinegars. What a treat for the senses! 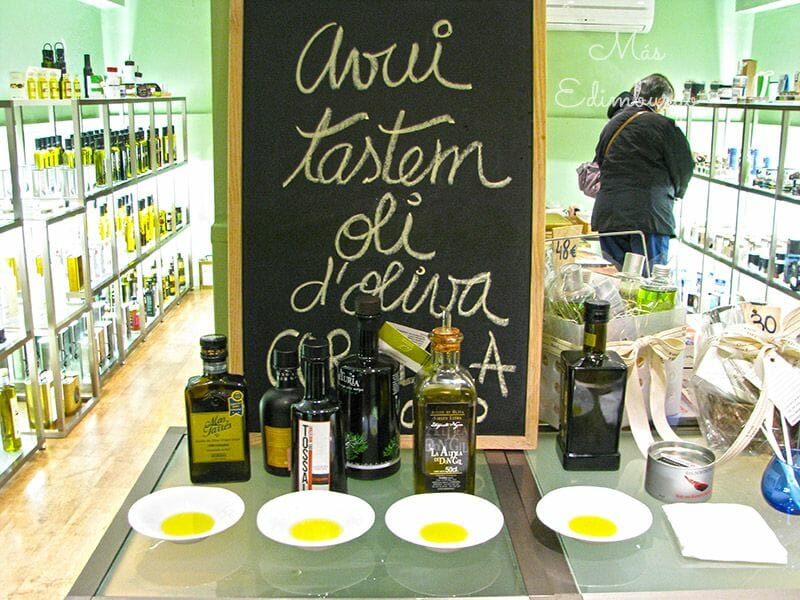 ‘Today we taste olive oil’, and that’s exactly what we did at Oli Sal. 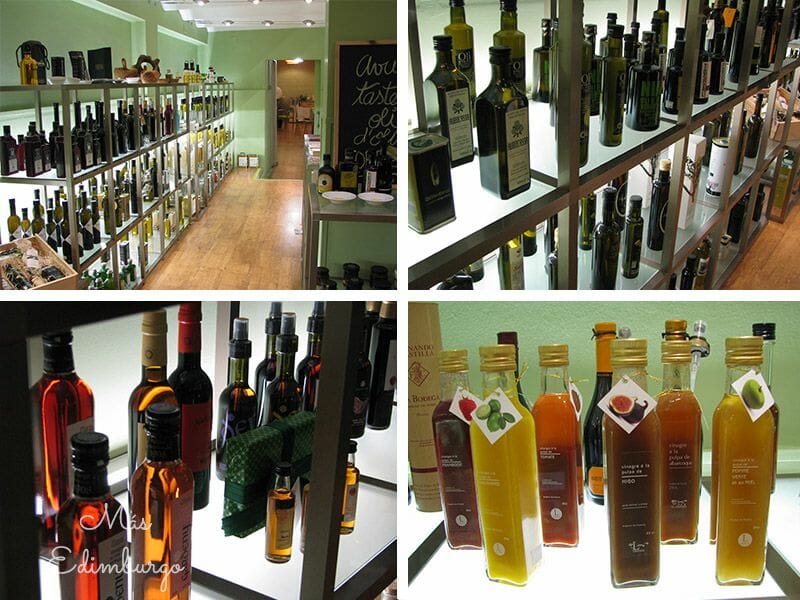 The wide range of olive oils and balsamic vinegars in store at Oli Sal.

A few blocks away, in the always lively Plaça de la Revolució, Pepa Tomate was waiting for us. This restaurant serves traditional Catalan and Spanish cuisine with a twist. Each one of us got to enjoy a huge serving of their succulent Braves amb gràcia, patatas bravas with a sweet, mild home-made tomato and garlic dressing. They were heavenly and, I dare say, one of the most distinctive bravas I’ve tasted in Barcelona (at nearby Plaça del Sol you’ll find some pretty amazing ones, too). We were also served an appetizer: the scrumptious vegetarian option was bunyols d’espinacs, which consisted in fried spinach balls topped with honey. A glass of vermut was just the right drink to wash down these treats.

Pepa Tomate, Catalan and Spanish cuisine with a (tomatoey) twist.

We headed on to our next stop, but before that, our knowledgeable guide introduced us to Casa Comalat, a colorful modernist building in c/Còrsega designed by Valeri i Pupurull. And… time for some artisan beer! La Cervesera Artesana (cervesa is Catalan for beer) is a small brewery and pub in c/ Sant Agustí. They brew their own range of beers, which changes every few months and includes some unexpected flavors. 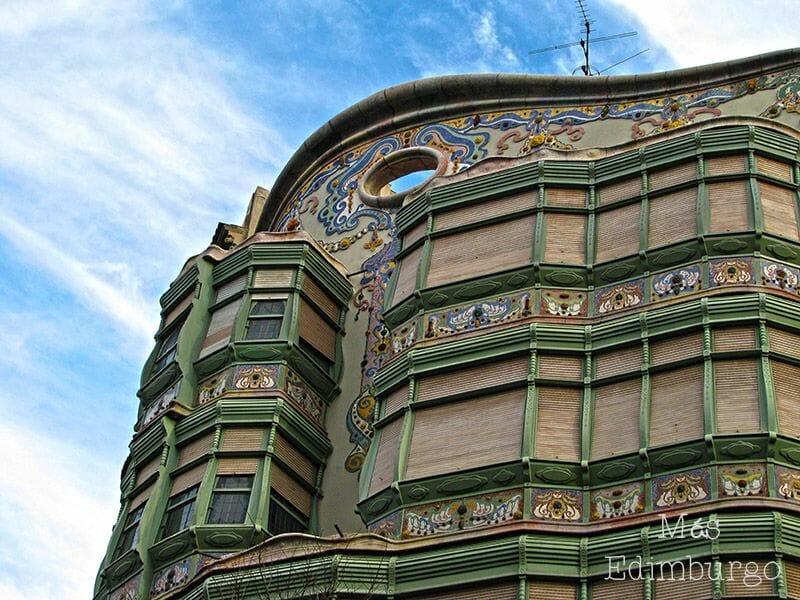 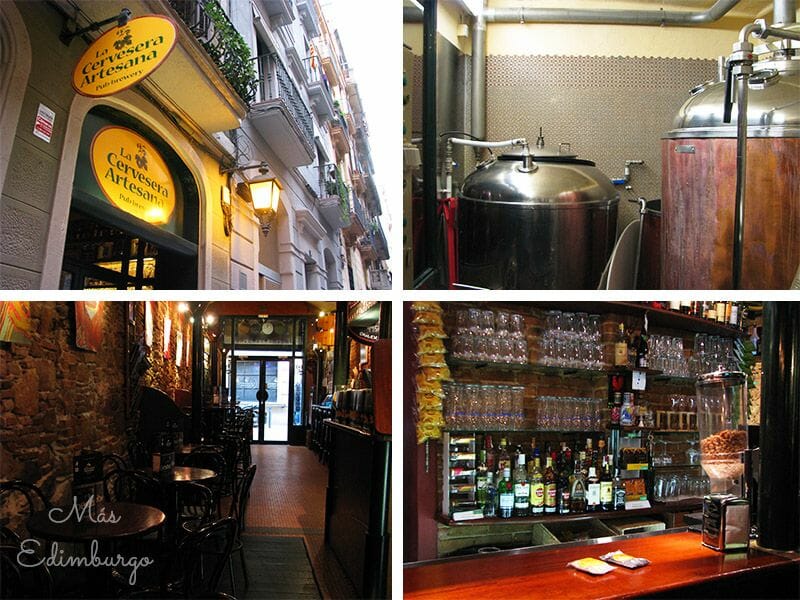 La Cervesera Artesana is a lovely pub & brewery in Gràcia.

I had been there before and it’s a cozy place to meet up with friends after work – a bit pricey when compared to other beers, but keep in mind they are home-brewed in the premises and they aren’t sold anywhere else in Barcelona. We got an inside peek into the brewing rooms and, afterwards, Xavi, our host, gave us some tips on how to taste three of their beers. I love artisan beers, so this was definitely one of the highlights of the tour for me! 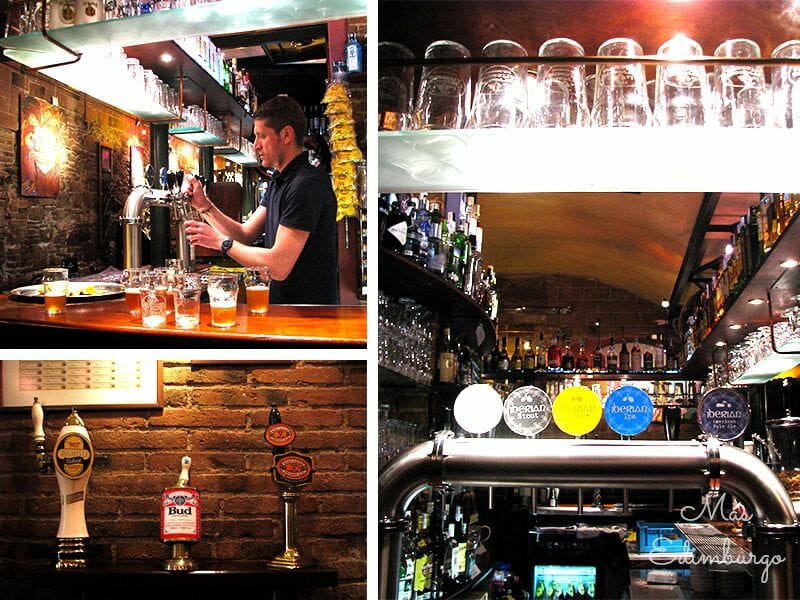 At La Cervesera Artesana, we learnt how to taste artisan beers.

And time for one last stop – at that point, I was so full I couldn’t imagine what was next, but so far everything had been so nice that, of course, our last meal didn’t disappoint. After visiting Plaça de la Virreina and Plaça del Diamant, two of Gràcia’s quaint squares, and learning about their origin and history, we headed to a restaurant with a focus on Catalan cuisine located on Ramón y Cajal street. There, to wrap up a lovely afternoon, we sampled three seasonal Catalan dishes with a glass of wine: pa amb tomàquet (bread with tomato rubbed over it, seasoned with olive oil), favetes (sautéed broad beans with artichokes) and trinxat  (mashed potatoes and cabbage). 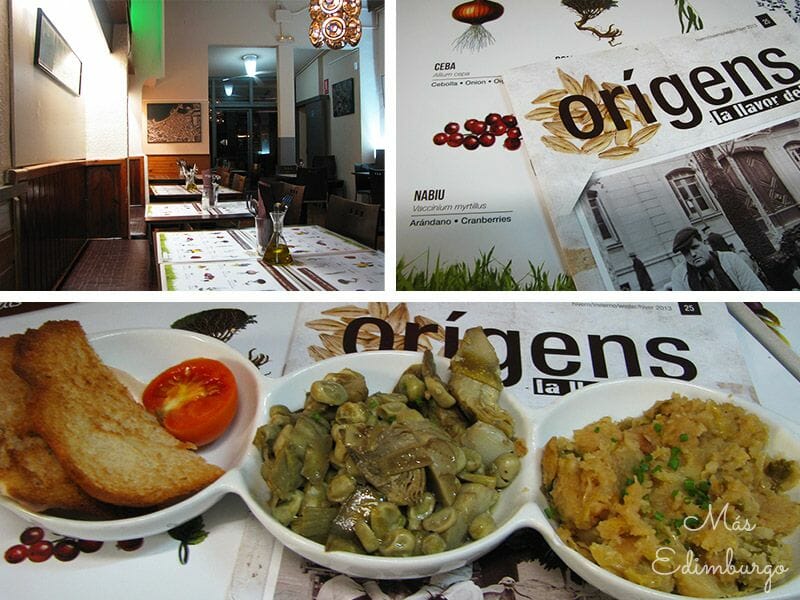 A taste of Catalan cuisine through three seasonal dishes.

And so our Gastournomic tour ended – with a satisfied belly and a deeper love than ever for Gràcia’s history and atmosphere. If you feel like discovering this unique neighbourhood, don’t hesitate – do it through its wonderful eateries! Where’s you favorite place to eat in Gràcia?

Disclaimer: I was invited by Gastournomic to try their Gràcia food tour, but the decision to write this article and all the opinions in it are, as always in Más Edimburgo, my own.

Icons made by Google, Freepik, Smashicons and Ryan Thomas Noll. 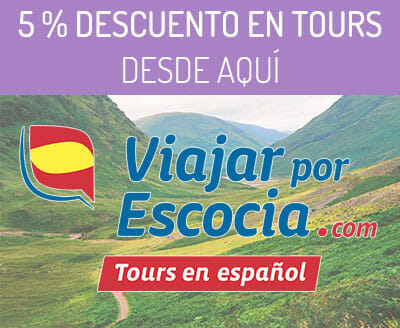 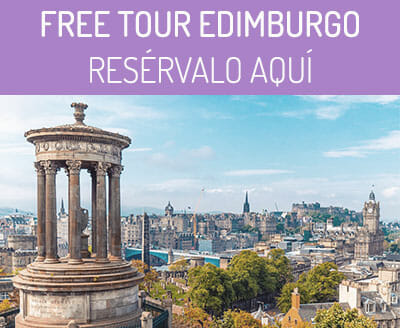